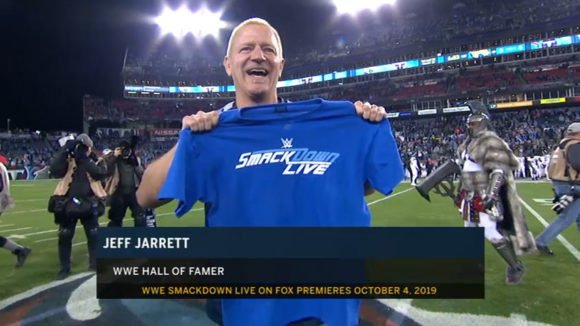 As noted, WWE Hall of Famer Jeff Jarrett was the honorary "12th Titan" for the NFL's Tennessee Titans for their game against the Jacksonville Jaguars last night. The Titans ended up winning the game 9-30.

Jarrett participated in the pre-game ceremony in Nashville and got some publicity for WWE. A graphic on the screen billed Jarrett as a WWE Hall of Famer and it was noted by the announcers that WWE SmackDown will be coming to Fox beginning on Friday, October 4, 2019. Jarrett also raised a SmackDown t-shirt, as seen below.

Joshua Banks contributed to this article.