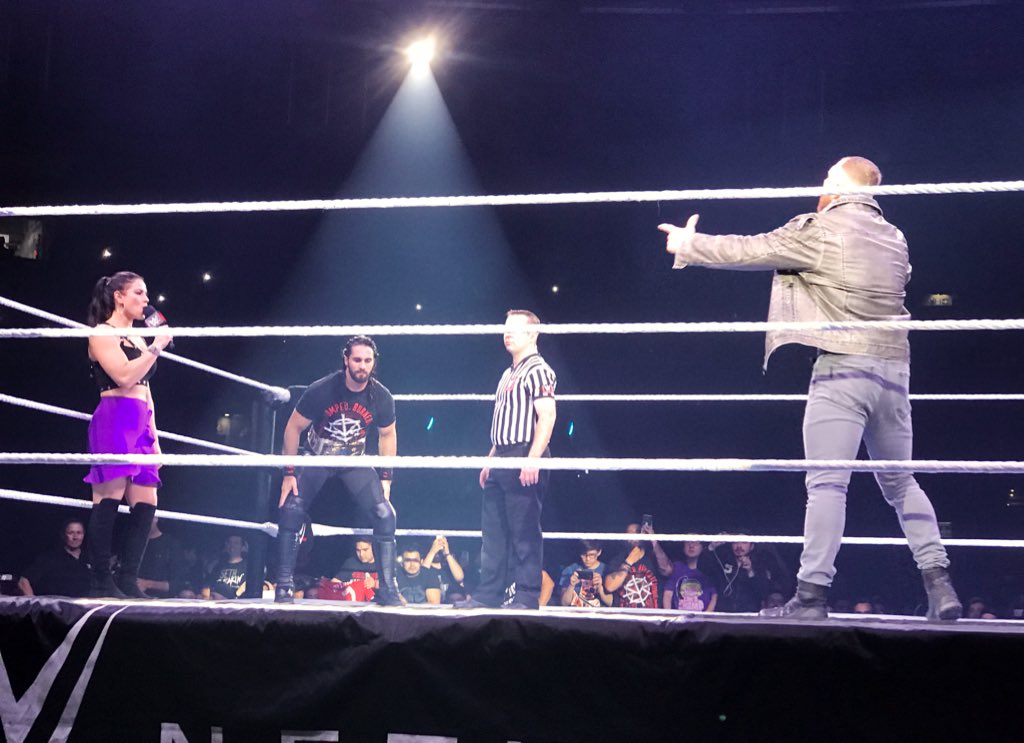 Thanks to Alistair K. for the following WWE live event results from Wednesday's show in Santiago, Chile:

* Drew McIntyre defeated Finn Balor and Dolph Ziggler in a Triple Threat, pinning Ziggler with a Claymore Kick. Balor tried to shake Dolph's hand after the match but Ziggler walked away

* Natalya came out and called Ruby Riott to the ring for a fight, accusing her of disrespecting her late father. The Riott Squad came out and triple teamed Natalya. Dana Brooke and Mickie James joined in until Ember Moon and Bayley made the save. Natalya powerbombed Sarah Logan onto a table but it wouldn't break, stiff looking spot. Natalya followed up with a splash and the table finally broke. Natalya, Ember and Bayley celebrated together while The Riott Squad helped Logan up to the back

* WWE Cruiserweight Champion Buddy Murphy retained over Gran Metalik. After the match, Metalik was leaving but he was attacked by Andrade "Cien" Almas as he came out for the next match

* Rey Mysterio defeated Andrade "Cien" Almas with Zelina Vega. Almas attacked Gran Metalik before the match and Rey was his replacement. Fans chanted for WWE Hall of Famer Eddie Guerrero during the match and Rey dedicated the win to him

* Elias defeated General Manager-Elect Baron Corbin, Bobby Lashley and Drew McIntyre in a 1-on-3 No DQ Handicap Match. This started as Elias vs. Corbin but Corbin changed the rules midway. Apollo Crews ended up coming out to help Elias get the win. Elias was way over for the match and his pre-match musical performance.

* Heath Slater, Titus O'Neil, No Way Jose and Apollo Crews defeated Rhyno, Jinder Mahal, Scott Dawson and Dash Wilder. Rhyno worked as a heel and was over. This match was mostly comedy. Curt Hawkins came out after the match and issued a challenge to Crews

* RAW Women's Champion Ronda Rousey defeated Nia Jax and Tamina Snuka in a 1-on-2 Handicap Match. This started as Jax vs. Rousey but Tamina interfered to cause the DQ. Rousey didn't want to win that way so she demanded a Handicap Match. She made Tamina submit to the armbar to win. One interesting note here, Nia's heel reaction was the loudest of the night by far, perhaps bigger than the other heels combined

* WWE Intercontinental Champion Seth Rollins retained over Dean Ambrose in the main event. Rollins cut a post-match promo and praised the fans of Chile for being some of the best in the world