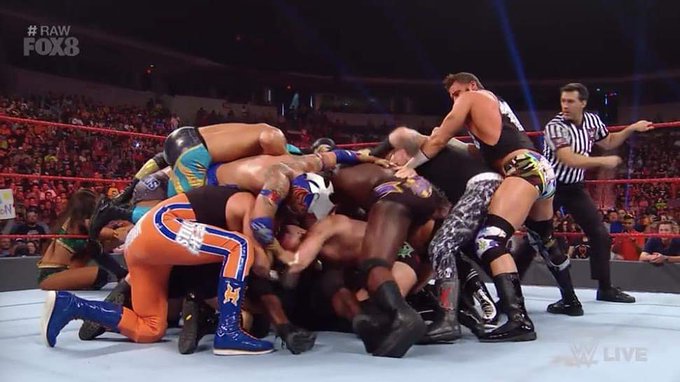 Tonight's WWE RAW opened with a Mosh Pit Mixed Tag Team Match that saw R-Truth and Carmella retain the WWE 24/7 Title over Drake Maverick and wife Renee Michelle. The 24/7 Rules were suspended during the match as Superstars surrounded the ring in the "mosh pit," but they all entered the ring as soon as the bell hit. The Superstars piled on top of Truth but the referee made a call at the bottom of the pile, and Kanellis emerged with the title. He was then confirmed to be the new champion.

This is Mike's first title run with WWE. Truth's most recent 24/7 Title reign began at last week's RAW Reunion special after a pin on Maverick.

Below are a few shots from tonight's title change at the Verizon Arena in North Little Rock, Arkansas, and the post-match angle with wife Maria Kanellis.

Mike was chased into a backstage room by the other Superstars, and he locked himself in. Maria appeared and tried to get in, but Mike wasn't sure if it was really his wife. Maria then threatened him and said, "Because if you don't let me in right now, I'm going to knock down this door and kick you in your vagina."

The prestigious #247Championship is ON THE LINE to kick off Monday Night #Raw LIVE on @USA_Network! pic.twitter.com/L8GPo8LiwF

The MOSH PIT is ready.

Are you? #Raw #247Championship pic.twitter.com/IALJ3p0IAt

HOW DID HE DO IT?!@RealMikeBennett emerges from the pile as our NEW #247Champion! #RAW pic.twitter.com/fsi1CzVb3H

RUN, MIKE, RUN!! @RealMikeBennett has captured the #247Title from @RonKillings and is on the MOVE on #RAW! pic.twitter.com/iIdfBq9ieH