WWE and Post Consumer Brands have announced an extension to their partnership.

The promotion, which begins Tuesday, October 1 and runs through Saturday, February 29, 2020, also includes a 3 month trial of WWE Network, when you buy 3 boxes of Honeycomb or Golden Crisp.

Below is the full announcement along with a photo of the cereal boxes:

LAKEVILLE, Minn., and STAMFORD, Conn., Sept. 26, 2019  Post Consumer Brands and WWE® (NYSE: WWE) today announced an expanded partnership that brings the thrill and excitement of WWE to cereal boxes nationwide as superstars Becky Lynch and Big Show will be featured on the front of nearly 7 million boxes of Post Honeycomb® cereal and Post Golden Crisp® cereal. The partnership was announced today at Advertising Week in New York City.

Raw Women's Champion Becky Lynch will be featured on the front of Golden Crisp cereal, whose iconic mascot Sugar Bear remains a beloved fan favorite, while Big Show will be featured on boxes of Honeycomb, a cereal known for its big flavor and unique big honeycomb shape.

"Post and WWE are the perfect match, as both brands appeal to the entire family," said Roxanne Bernstein, Chief Marketing Officer, Post Consumer Brands. "WWE programming is family-friendly, with more parents and kids watching its action-packed content together than other sports leagues. This partnership is a great way for us to engage with fans of WWE."

"We are excited to expand our partnership with Post, which leverages the family-friendly essence and reach of the WWE brand," said John Brody, WWE Executive Vice President, Global Sales & Head of International. "Having our larger-than-life WWE superstars featured on millions of Honeycomb and Golden Crisp boxes is a tremendous statement for our partnership and will enable Post to further reach millions of families across the country."

The partnership will be supported by a variety of social media and marketing initiatives, including digital spots featuring Becky Lynch and Big Show.

For a limited time, fans can get a free three-month trial of WWE Network when they purchase three boxes of participating Honeycomb cereal or Golden Crisp cereal and redeem their receipts online. The promotion begins Tuesday, Oct. 1, 2019, and runs through Saturday, Feb. 29, 2020. To redeem the promotion and for full details and terms, please visit www.wwexpost.com. 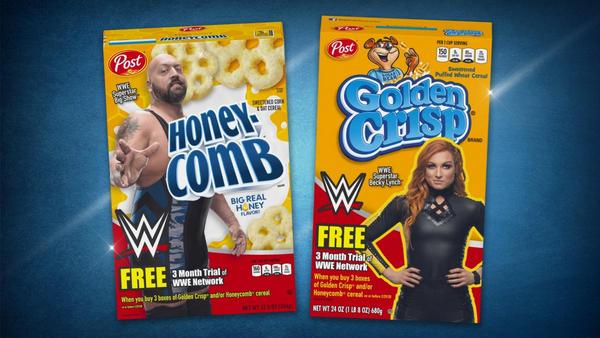