- As we previously reported, ROH World Champion RUSH and Bandido weren't able to compete at Saturday's Death Before Dishonor Fallout television tapings. Bandido wasn't medically cleared to wrestle because of a knee injury, while the nature of RUSH's injury wasn't specified. According to Dave Meltzer of F4WOnline.com, RUSH had suffered an ankle injury while catching Matt Taven at Friday's night's Death Before Dishonor pay-per-view.

- We The Independent co-founder David Starr will be organizing a Unionize wrestling workshop with the London branch of the Industrial Workers Worldwide on Tuesday, October 29th at the May Day Rooms at 88 Fleet St. in London from 10 a.m. to 5 p.m. The workshop is free of charge and food will be provided. All delegates will receive a free "We The Independent" merchandise package. To book a spot or get more information, contact [email protected].

- Impact Wrestling announced today that they are officially inviting Joe Maddon to return to Chicago as a special "Manager" on October 20th for the Bound For Glory pay-per-view at the Odeum Expo Center in suburban Chicago. Maddon had led the Chicago Cubs to the 2016 World Series Championships, the team's first in more than 100 years. He spent the past five seasons as the Cubs manager, but it was announced this past Sunday that Maddon and the Cubs were parting ways. One of the top Bound For Glory matches is the 20-person "Call Your Shot" Gauntlet Match, with the winner earning a future title-match for the championship of their choosing. Maddon will have a ringside seat for this match, and will then be asked to offer "managerial tips" to the winner.

"Joe Maddon is legendary in Chicago for his accomplishments in 2016, so IMPACT Wrestling is proud to invite Joe to continue his managerial career in Chicago  on a slightly different field," said IMPACT Wrestling Executive Vice-President Scott D'Amore. "Every wrestler wants to be the Champion, and who wouldn't want to have legendary baseball manager Joe Maddon in their corner? Joe is a three-time Manager of the Year and two-time World Series Champion manager.

According to Impact, Maddon has not yet officially accepted the offer.

- As previously reported, Face 2 Face Wrestling School CEO Richard Borger announced a show on the island of Barbados, which is set for November 16th and 17th. The event, titled Bruggadown Barbados, is set to become a bi-annual event for the island with the first day featuring a Meet and Greet as well as an exclusive VIP Beach Party, with the second day featuring the live show. Jack Swagger vs. Impact Wrestling Champion Brian Cage, Evan Bourne vs. PJ Black and Ryback vs. Simon Sermon have officially been announced. Other notable names scheduled for the show include Taya Valkyrie, Aron Stevens (f.k.a. Damien Sandow) and Simon Grimm (f.k.a. Simon Gotch), who have opponents yet to be named. WWE Hall of Famer Teddy Long will be the acting General Manager, Melissa Santos will be ring announcing and Adam Rose will lead the play by play team.

The card will feature 8 matches and be held at the Garfield Sobers Gymnasium, with a capacity of just over 5000. Information and updates for the event can be found at face2facewrestling.com/barbados. You can check out the official poster for the event below: 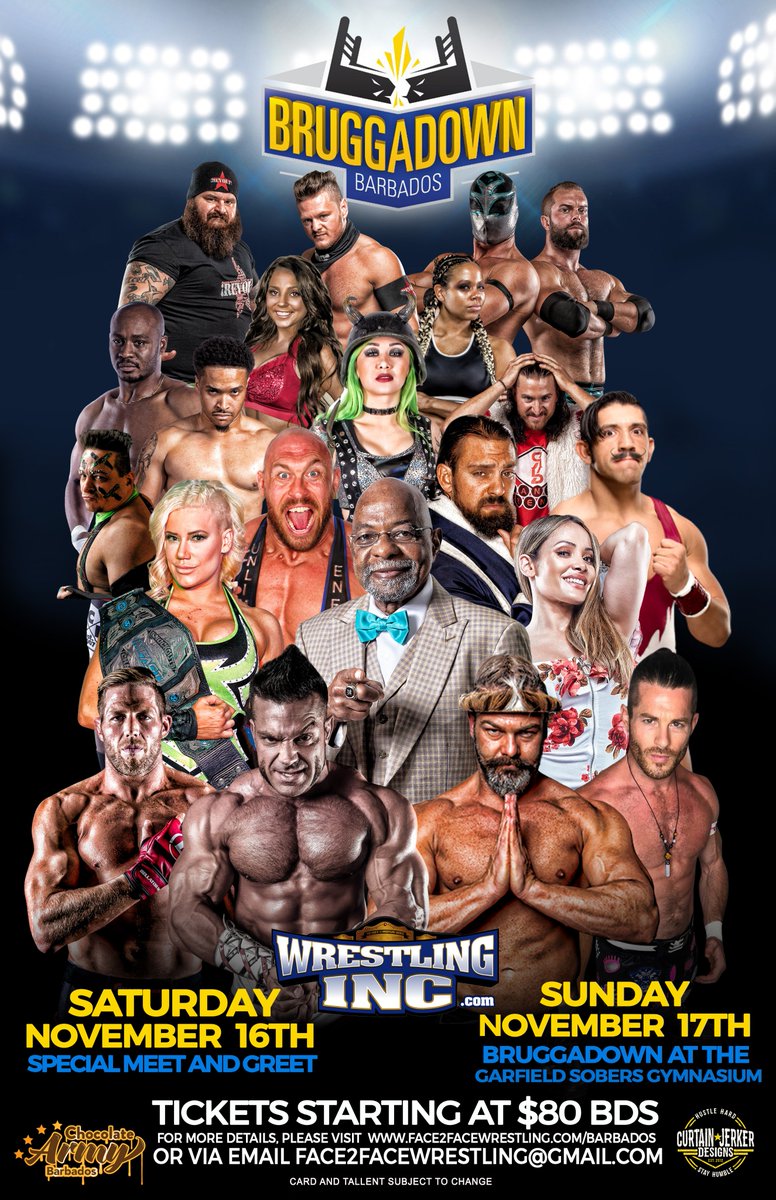