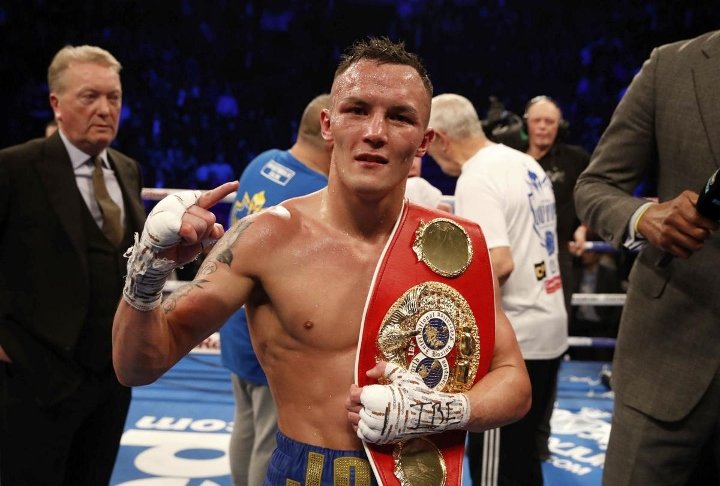 Another top boxer from England will be in attendance for Friday's WWE SmackDown and RAW tapings from Manchester, England at the Manchester Arena - undefeated IBF Featherweight Champion Josh Warrington.

The 28 year old from Leeds will be backstage visiting at the double tapings, according to SunSport.

"I'm very much looking forward to being at the wrestling this Friday in Manchester," Warrington told SunSport. "I remember growing up watching WWE and I'll be coming along with my nephew, who is two generations down the line and a huge fan now."

Warrington also gave a quick warning , that he's ready to deliver a DDT if anyone gets in his way.

"It's great to see so many boxers being involved both past and present. Over the years we've had Floyd Mayweather and of course we've just seen Tyson Fury  who did really well," he said. "So I'm really looking forward to being a part of it but I'm going to let everyone know now  if anyone starts on me then they'll be getting a DDT from the Leeds Warrior. I might only 5ft 7in, but a kick to the stomach and a DDT and they'll be out for the count. Let's have it!"

There's no word yet on if WWE has plans for Warrington to appear on TV, or in front of the live crowd.

As noted, WWE has confirmed that hometown star Tyson Fury will be backstage at the tapings, and will be appearing on the SmackDown broadcast. They are teasing another altercation between Fury and Braun Strowman, who Fury defeated by count out at WWE Crown Jewel last week.

Tyson Fury returns to SmackDown on FOX this Friday

In the wake of a debut victory at WWE Crown Jewel, Tyson Fury will head to Friday Night SmackDown this week on FOX.

As reported on WWE Backstage, The Gypsy King is slated to appear when the blue brand broadcasts from the lineal heavyweight champion's hometown of Manchester, England. With Fury in the building, Braun Strowman shouldn't be far behind as the two brawlers have unfinished business.

Are Fury and Strowman headed for another epic collision?

Tune in to Friday Night SmackDown on FOX at 8/7 C to see what's next for the two heavyweight competitors.