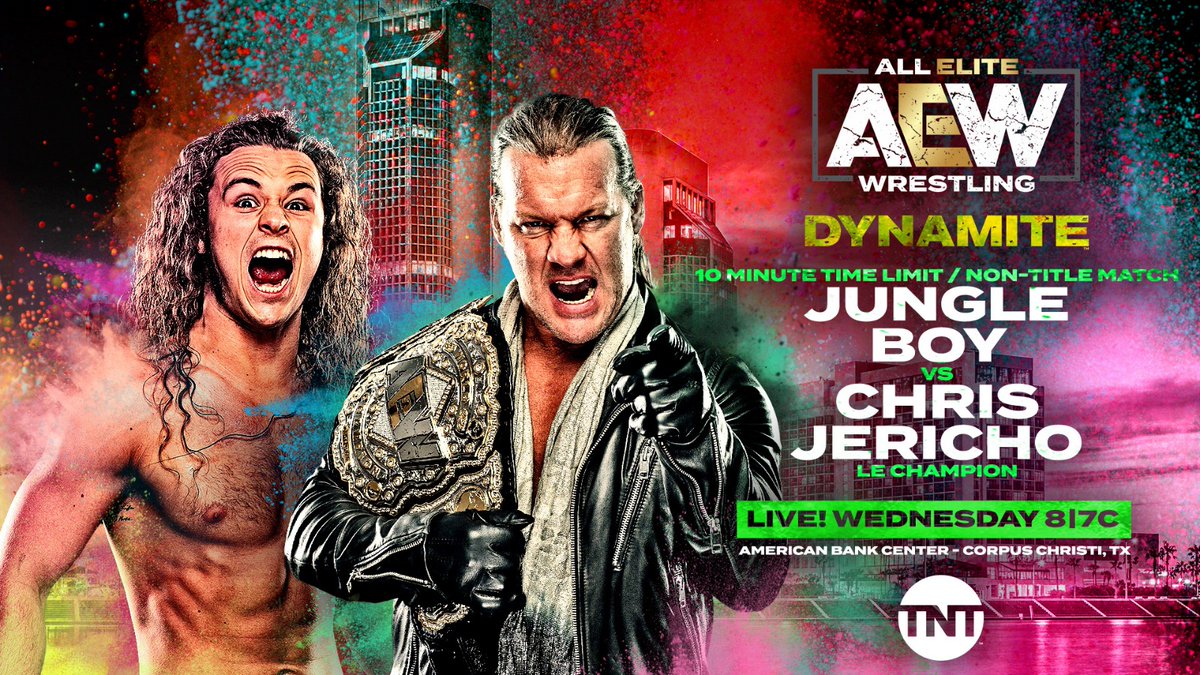 Welcome to Wrestling Inc.'s live coverage of AEW Dynamite from the AmericanBank Center Arena in Corpus Christi, Texas, beginning at 8 PM EST. Be sure to chime in on your thoughts about tonight's show in the comments section below. Additionally, share our live coverage through social media. Make sure to click the REFRESH button to continue to get the most current up to date coverage.

Commentators Jim Ross, Excalibur, and Tony Schiavone welcome fans to another edition of AEW Dynamite. The first match of the night begins.

Rey Fenix and Omega start the match. Both men run around the ring. The fans are split down the middle with "Cero miedo" and "Cowboy s**t" chants. Omega lifts Fenix, Fenix counters. Omega with a low DDT. Omega grabs Fenix and tries to put him in the one-winged angel position, Fenix gets out of it in the nick of time and tags in Pentagon Jr. Omega tags in Page. Pentagon slowly takes off his glove and gestures cero miedo. Pentagon lands a sharp chest chop. Page fires a chest chop of his own. Pentagon is met with a shot from Page after running from the ropes. Page tags in Omega. Both Omega and Page are in the ring going back and forth with double hand chops. Fenix comes in to help his brother but gets sent out of the ring by a chest chop. Omega with a tilt-a-whirl head scissors sends Pentagon out of the ring. The Terminator claps start. Omega lands the Rise of the Terminator on Pentagon and Fenix on the outside. Back in the ring, Pentagon goes for a pinfall attempt on Page, Page kicks out.

Fenix is tagged in. Fenix kicks Omega right near his chest. Omega gets back up and lands multiple chest strikes. Omega counters with a running knee. Pentagon runs into the ring and takes Page off the apron. Pentagon with a cheap shot on Omega while Fenix is distracting the referee. Page climbs back up on the apron, gets tagged in, and takes Pentagon down with a flying lariat. Page flies up and over the top rope on Pentagon. Page gets back in the ring and flies towards the other side of the ring to take out Fenix. Page with a drop sault on Pentagon and Fenix, Page covers Fenix, Fenix kicks out. Fenix rolls through with a facebuster, cover, Page kicks out. The Lucha Brothers come together with a combination, Pentagon covers Page, Page kicks out again. Pentagon kicks Omega right in the face, who slowly gets back up on the apron after some time on the outside. Omega back in the ring now, counters Fenix. Page with a pop-up/German suplex on Fenix. Omega with a powerbomb on Pentagon, cover, Pentagon kicks out. Page with a sling blade and discus on Pentagon. Omega lands a snapdragon suplex on Fenix. Fenix gets right back up. Omega grabs Pentagon, Pentagon counters, miscommunication occurs, Page accidentally clotheslines Omega. Pentagon ends the match with double foot stomp, cover, The Lucha Brothers win.

Both teams giving everything they've got in the opening match tonight!
Watch #AEWDynamite NOW on @TNTDrama 8e/7c #AEWonTNT @AEWonTNT pic.twitter.com/iYE1VXXHP4

Post-Match: Omega and Page are still in the ring. Page and Omega start getting into it. PAC appears on the titron. He wants Omega to follow him to the back. PAC walks into a room where Michael Nakazawa's back is towards the door. Omega runs to the back as fast as he can. During the split-screen commercial break, Omega and Page run to the back only to get attacked by The Lucha Brothers once more. Omega gets up and tries to find Nakazawa and PAC. Page is following him.

The camera pans over to Darby Allin, who is set to join Cody and compete against The Butcher and The Blade. That match is next!

Ross, Excalibur, and Schiavone run through all the matches that will happen tonight.

The Butcher & The Blade (w/The Bunny) vs. Cody & Darby Allin

Allin and The Butcher start the match. Both men lockup. Butcher throws Allin across the ring. Butcher tags in The Blade. Blade puts Allin in a side headlock. Allin shows his speed by taking Butcher off the apron and then lands an arm drag on Blade. Allin tags in Cody. Blade tags in Butcher. The fans chant "Let's go Cody." Cody with a kick and a slap. Butcher manhandles Cody by sending him over to his corner. Butcher tags in Blade. Cody powerslams Blade. Blade tags in Butcher. Butcher with a big boot on Cody stops him in his tracks. Blade with a back kick. Blade carries Cody over to Butcher, who lands a leg drop on him. Butcher is now the legal man. Their match continues on the split-screen.

Blade goes for the cover, Cody kicks out. Cody steps out of the ring, rolls back in. Blade kicks Cody in the midsection before tagging in Butcher. Cody flies off the middle rope and gets caught midair. Butcher slams Cody down. Cody on the outside gets attacked by The Bunny. Allin runs over and Bunny backs away. Butcher sends Cody to the turnbuckle. After, Butcher puts Cody in an arm lock. Cody breaks out of it with a boot to the midsection. Butcher tags in Blade. Blade and Cody run into each other with a mid-air collision. Allin is tagged in. Butcher with a knee to Allin's back. Butcher locks Allin up in a cloverleaf submission. Cody runs into the ring to break the submission. Allin over the top of Butcher with a stunner. Cody is tagged in. Cody with the Cross Rhodes. Bunny climbs up to the apron to distract the referee as Cody pins Butcher. Allin and Cody fly out of the ring and take out Blade and Butcher. Allin off the top rope lands the coffin drop on Butcher, who is sitting on the apron. Cody finishes the match with the Cody Cutter on Blade. Cover, Cody and Allin win.

After, a vignette is shown of Jungle Boy preparing for his match against Chris Jericho.

Next, Awesome Kong and The Nightmare Collective make their way down to the ring.

Kong with a spinning back fist, follows it up with a face plant, cover, Kong wins.

Post-Match: The Nightmare Collective cut some of the local talent's hair off.

After that quick match, a clip is shown of Ross interviewing Jungle Boy before his big match tonight. His match against "Le Champion" Chris Jericho is next!

.@boy_myth_legend is aggressive in his attack against Jericho!
Watch #AEWDynamite NOW on @TNTDrama pic.twitter.com/c42r3agKUJ

Hager on the outside attacks Jungle Boy. Luchasaurus and Hager start to brawl. Marko Stunt goes over to help his friends and gets taken out by Hager with a hard punch.

During the commercial break, Jericho comes back down to the ring and starts throwing chairs and yells at Jungle Boy's family in the front row. He leaves once again. He yells out at the audience.

Schiavone meets Jericho at the top of the ramp. Jericho refuses to believe that Jungle Boy lasted 10-minutes with him. Jericho says the more important thing to discuss is Jon Moxley. Jericho and the Inner Circle have a surprise for Moxley on January 1st. He hopes that Moxley will make the right decision and say yes to joining the Inner Circle.

Up next, a number one contenders match to determine who will face Riho for the AEW Women's Championship!

Statlander will challenge Riho for the AEW Women's Championship on January 1st!

Backstage: Shawn Spears and Tully Blanchard need to find a guy that can be molded and can work well with Spears and Blanchard. They're going to keep scouting for the right guy!

Up next, the main event!

SCU (c) vs. The Young Bucks for the AEW World Tag Team Championships

Nick Jackson and Frankie Kazarian begin the match. Kazarian with a quick tag to Scorpio Sky. Matt Jackson is tagged in. Matt with a powerbomb/enziguri on Kazarian. Nick also with an enziguri on the apron. Sky is tagged in. Sky with a cover on Matt, Matt kicks out. Matt tags in Nick. Nick with a step-up enziguri on Sky. The fans applaud. Nick off the top rope with a hurricanrana. Matt is tagged in. Matt with the cover on Sky, Sky kicks out. The fans chant "This is awesome." Nick flies off the top rope and lands on both members of SCU on the outside. Both Nick and Matt land on top of Sky, who is back in the ring now. Matt puts Sky in a half crab submission. Sky tags in Kazarian. Kazarian with a double lariat on The Young Bucks. Kazarian and Sky fly over the top rope with their own ranas to take out The Bucks on the outside. Sky and Matt roll back in the ring, Sky covers, Matt kicks out.

What in the hell?!
Watch #AEWDynamite NOW on @TNTDrama pic.twitter.com/hxTr6dfhYb

Sky and Kazarian put The Bucks in double sleeper holds. The holds are broken. Kazarian and Matt are tagged in. Both men exchange forearm strikes. Matt puts Kazarian in the tombstone position, Sky slaps Kazarian's back and tags himself in. Sky with a TKO, Kazarian with an SCU on Matt, cover, SCU retain their titles!

That concludes this week's show. AEW Dynamite will be back on Wednesday, January 1st. Happy Holidays everyone! We'll see you in the new year!