Actor On Being Tackled By Security At Last Night's WWE RAW, More On What Happened With The Incident 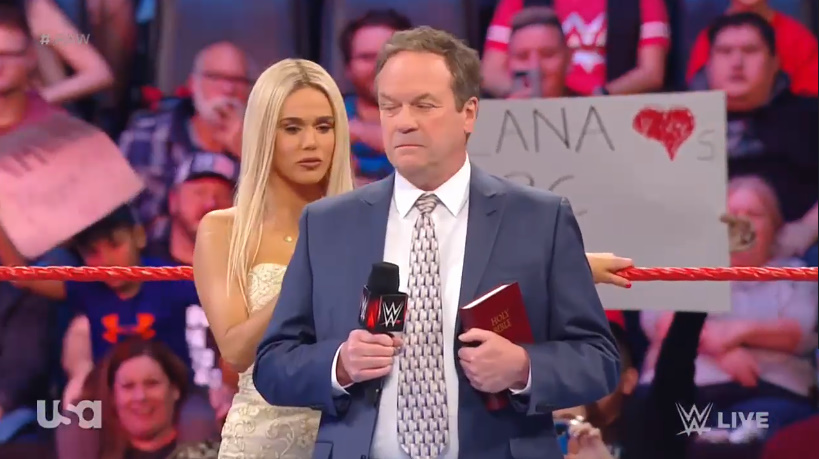 As noted, it looked like a fan tried to rush the ring on last night's WWE RAW after AJ Styles made his exit following the win over Akira Tozawa. The man was quickly tackled by security as RAW went to commercial. They came back from the break and we learned that the man tackled was actor Rick Malone, who was entering the ring for the segment with Lana and Bobby Lashley. Fans in attendance noted that security didn't realize who Malone was as he entered the ring earlier than he should have.

There was a breakdown in communication at ringside, which led to security thinking Malone was some random person trying to do a run-in, when he just jumped the gun on his cue. PWInsider adds that security was eventually informed by another WWE crew member that Malone was an extra, authorized to be in the ring, and that's when he was released to move forward with the segment when RAW returned from the break.

Malone, who apparently got the word "consummate" confused with another, posted more video of the incident on his Facebook and joked, "This is what happened tonight at WWE/RAW: I needed to get into the ring in order to consummate the 'Bobby Lashley and Lana Wedding' (which was totally disrupted last Monday night in Hartford CT), but security prevented me, so I had no other choice but to dive into the ring headfirst. Security was not pleased! But the married couple was very happy! [heart emoji]"

He joked in another post, "In my defense, I was only trying to do my job and officiate the 'Bobby Lashley and Lana Wedding' tonight but security wouldn't let me into the ring so I had no other choice but to dive in headfirst!"

Malone continued to re-post links to articles on what happened and was in good spirits. He wrote in another caption, "Obviously not my best camera angle!"

"It was all just a simple misunderstanding!," he said in another post.

The back-to-back RAW appearances for Malone are at least putting eyes on the actor as last night's incident was picked up by several mainstream outlets, including TMZ. Malone has updated the list of jobs on his Facebook page and added, "Bobby Lashley and Lana Wedding; Wedding Officiant; WWE"

There's no word yet on if Malone received hazard pay for the gig, but one of his friends mentioned it as a possibility in the comments section of one of his posts.

You can see some of Malone's related posts on the incident below: