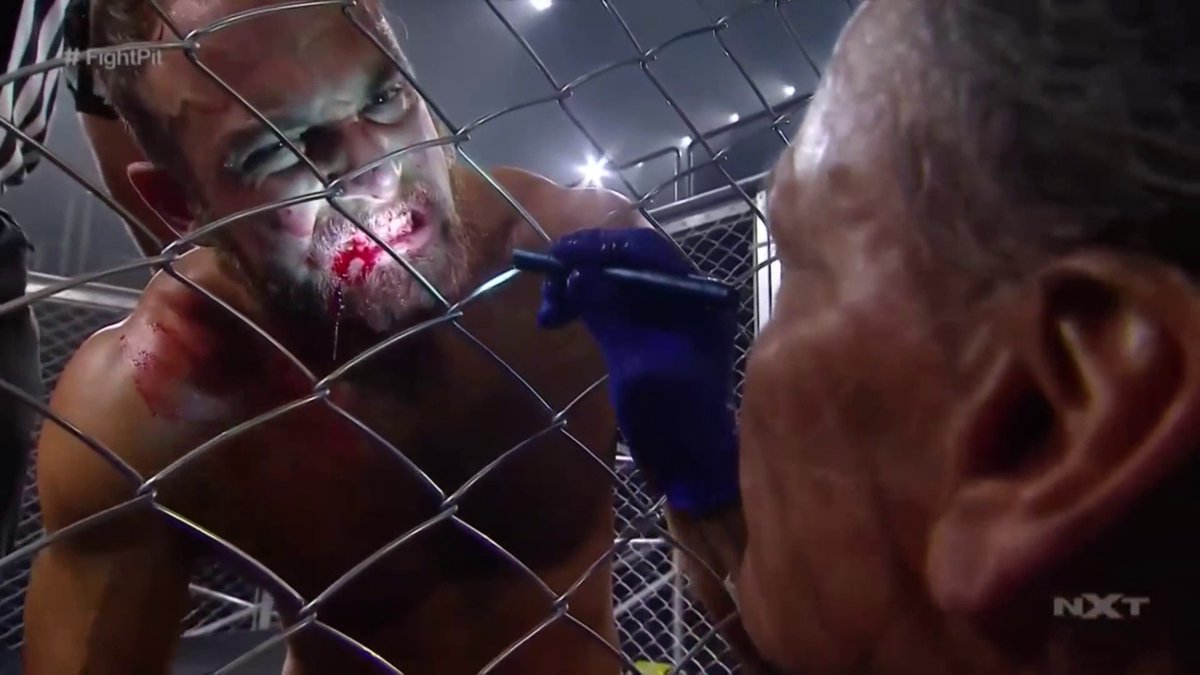 Thatcher won the match by making Riddle pass out in the rear naked choke. The only ways to win the fight were by submission or knockout.

The bout took place inside the two-level NXT Fight Pit, which included a platform that went around the top and a regular cage wall with mat as the bottom level. There were no ropes or turnbuckles on the bottom level. WWE Hall of Famer Kurt Angle was the special guest referee for the match, and referee Drake Younger checked the competitors for foreign objects before they entered. A third referee was stationed on the top level of the structure. There was also a ringside doctor that checked Thatcher through the holes in the cage wall at one point.

That angle saw Thatcher take a strike to the mouth and apparently spit out a few teeth. There's no word yet on if this was a real injury, but it looked to be just a part of the storylines. Thatcher also spit out a mouthful of blood when the teeth hit the mat. Thatcher's smile has been somewhat of a running joke in pro wrestling for a few years now, and it looked as if he was sporting the same fighter's smile as usual while he celebrated on top of the Pit as NXT went off the air.

It's believed that this may have been Riddle's blow-off to his NXT run, but that hasn't been confirmed. It was recently reported by multiple sources that Riddle is set to be called up to the main roster to work the WWE SmackDown brand, and that his official blue brand debut could come as soon as this Friday on FOX.

Stay tuned for updates on Thatcher's possible injury and Riddle's NXT status. Below are several shots from tonight's Cage Fight:

You're not dreaming. @RealKurtAngle is HERE in #WWENXT.

It's true. It's DAMN true. pic.twitter.com/g8GVVNujv7

Timothy Thatcher leaves the #FightPit victorious and more dangerous than ever. #WWENXT pic.twitter.com/0frMZaBrwy

Now you have to guess what Timothy Thatcher is about to give @RealKurtAngle.
?? His Gum
?? His Teeth#WWENXT pic.twitter.com/XT6kDgUeD5

WHAT. A. FIGHT! #WWENXT pic.twitter.com/iNHw47FzTI

This is NOT for the faint of heart. #WWENXT pic.twitter.com/pPrsJ1GCZC