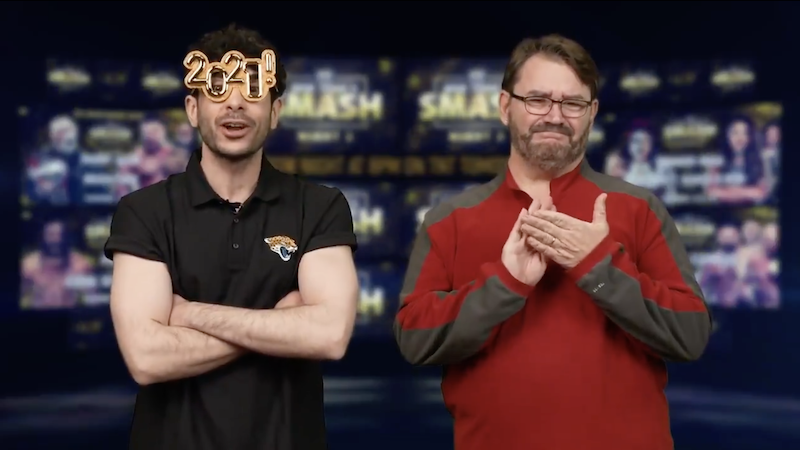 Khan started the promo by welcoming Impact to 2021, and congratulating them on 2020.

"Welcome to 2021, Impact Wrestling," Khan said. "Congratulations on a great 2020. Let's look at all the great things that happened to you last year - you had these paid ads from me, revenue coming in from me, you had the AEW World Champion Kenny Omega grace your show with his presence because I allowed it, and he brought the greatest title in all of sports with him, and tomorrow night you get to watch a real wrestling show. AEW Dynamite New Year's Smash Night 2. We have a huge card. Tony, please tell them how it's done."

Schiavone then went over the card for tonight's show, which you can find at this link. Khan gave another plug to Brian Cage vs. AEW TNT Champion Darby Allin and mentioned that Cage is a former Impact World Champion. Khan added that tonight's title match with Allin will be the biggest opportunity of Cage's career.

Khan continued the promo and thanked Don Callis for sending Impact World Tag Team Champions The Good Brothers to Dynamite last week. He also took a shot at The Good Brothers, while giving them some praise, and invited Impact to send anyone they want to Dynamite tonight.

"Don, it was great for The Good Brothers to show up on AEW Dynamite," Khan said. "I really enjoyed it. I'm not sure what's so good about them and actually, I don't even think they're really brothers, but they have a following, so Impact Wrestling congratulations, because you did at least one thing right in 2020. So, Impact Wrestling, feel free to send The Good Brothers, Don Callis, anybody you want, tomorrow night, AEW Dynamite New Year's Smash Night 2."

Schiavone then wrapped the "paid ad" promo and took a shot at AXS TV by saying Dynamite will be airing on a "real network" tonight.

It's possible that Impact stars will show up during tonight's AEW show as Omega and AEW World Tag Team Champions The Young Bucks will team up for six-man action. This Saturday's Impact Hard To Kill pay-per-view will be headlined by Omega and The Good Brothers vs. Impact World Champion Rich Swann and The Motor City Machine Guns.

Stay tuned for more. You can see last night's segment with Tony and Tony below: